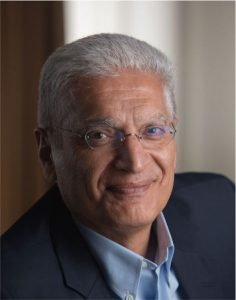 In a March 2017 discussion paper by McKinsey, a management consulting firm, six characteristics of the productivity-growth slowdown of the U.S. since 2004 are identified: “low value-added growth during the recovery after the financial crisis; a shift in the composition of employment in the economy toward lower-productivity sectors; a lack of productivity-accelerating sectors after the financial crisis; weak capital-intensity growth; uneven rates of digitization across sectors, where the least digitized often are the largest sectors, with relatively low productivity; and diverging firm-level productivity, with slowing business dynamism.”

How we digitize matters. The U.S. has a new opportunity for industrial growth by deploying cutting-edge industrial automation technologies to drive competitive productivity gains while also protecting and creating jobs. “Reshoring” jobs from lower cost countries is now a possibility and a necessity for economic growth and societal impact. Done right, industrial automation and digitization can make productivity efficiencies wipe out the relevance of lower labor wages.

The U.S. is a major global producer of industrial automation equipment. This represents the foundation of a new breed of manufacturing base with potential to reconfigure capital needs and operating expenses, enabling new business models, slashing costs of production, reducing inventories, and simplifying distribution logistics. With current exports close to $10.5 billion, the U.S. remains a leading player in industrial automation equipment and what has been called “Industry 4.0,” essentially the digitization of manufacturing. Whether we focus on export to leading U.S. export markets like Mexico, Canada, Germany, China, or Poland or in the return of jobs previously lost to China, Germany, Japan, or Canada, an exciting transformation could be taking place.

For one thing, the reshoring process itself is exciting as it promises contributions to much needed GDP growth through a boost in U.S. manufacturing output that is greater than can be expected from monetary or fiscal measures. In its 2016 data report, the Reshoring Initiative, a non-profit organization, estimates 220,000 net annual manufacturing jobs lost to offshoring beginning in the 2000-2003 period for which data is available. The tide turned in 2016, showing a net annual gain of over 171,000 jobs with reshoring and onshoring through foreign direct investments back into the U.S. for 2017. More impressive is the potential of another three to four million manufacturing jobs that could re-shore with a significant impact on U.S. economic growth.

The new wave of technology encompasses more specifically the fusion of advanced manufacturing techniques with IT, wide area networking, data, and analytics. This enables a plethora of new business models leveraging the digitization of the manufacturing world. Mark Twain understood the ideal business model in the gold rush culture of his time when he said, “During the gold rush, it’s a good time to be in the pick and shovel business.”

As the stars align between manufacturing, robotic automation, mass personalization, artificial intelligence, Internet of things, 3D printing, nano and biotechnology, Industry 4.0, and reshoring, to name a few, opportunities await those with a vision to invest in new data-driven business models — extracting the value of big data for monetization and optimization of processes. It involves automation and robotization as a replacement for cheap manual labor; simulation and fast prototyping as a replacement for costly product iterations; expansive system integration along the supply chain; cloud reliance with cybersecurity for scalability; augmented and virtual reality; 3D printing and additive manufacturing from intricate nanotechnology parts to large complex structures.

The digitization of the end-to-end manufacturing process and cloud-based machine learning and data science systems that are connecting the production process represent a significant and historic comeback opportunity for American manufacturing. Digitally interconnected devices that generate data to enable optimization and monetization in our cars, homes, cities, lives and a revamped creative manufacturing base can be the foundation for an economic renaissance in the U.S., in turn making for compelling investments by venture capital, private equity and major corporations leveraging cash reserves for impactful strategic investments in the economy. As some recent political shenanigans have made our world smaller in the eyes of many, our technological innovations can work to making us great again by making the world larger and our place in it larger still.

With the issue of the effects of automation on employment at the back of our minds, perhaps a word can be said on how to ensure the impact of any investment in this sector is positive not just in economic, but also in societal terms.

The way investments are made can make all the difference. For instance, a concentration of investments into manufacturing during industrialization in Europe caused major socioeconomic changes. Cottage industries could not compete with industrial manufacturing. People left artisanal jobs in villages and moved to urban areas for better wages from manufacturing; a different form of life ensued, affecting society in profound ways.

Concentrated investment in automation, in our postmodern world, could mean the opposite. As money is invested into robotic manufacturing, manufacturing workers may initially be repositioned for higher value jobs if they have the skills, but may, most likely will, ultimately lose jobs. For those who are more resourceful, they have no choice but to survive by reskilling or going back to artisanal jobs in cottage industries they can muster; lest there may be social upheaval.

An example that illustrates this in my mind is how we might invest in autonomous vehicles. If we concentrate investments and lend or invest $50 billion to enable major ridesharing companies to purchase their own self-driving vehicles, we will lose 3 million driver jobs. If instead, we lend or invest $20,000 with each of the 3 million drivers, we create income for 3 million people who can sit at home and see their small asset, the car, work for them via the major ridesharing enterprises and bring in the bacon both to the individual owner and the platform company.

If our vision for reshoring is to create jobs and better standards of living in our pursuit of happiness, how we invest will have a profound effect on both economic and societal impact.

Ferey Faridian is a partner, co-lead of Technology, and member of the Manufacturing, Energy, Healthcare, and Banking groups at the Newport Board Group, a nationwide partnership of experienced CEOs and board members who leverage the Newport Expert Network™ to help CEOs of middle-market companies, as well as their private equity investors and lenders, navigate strategic, financial, and operational issues for sustained success in their mission of growth and prosperity.